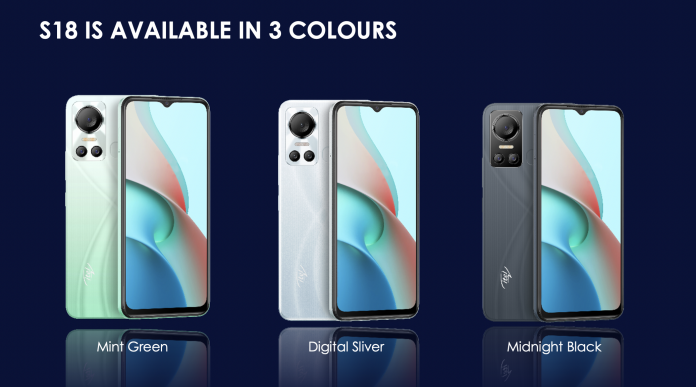 itel has launched the itel S18 series smartphones for Nigerians who love short videos. itel was recently ranked as Africa’s 15th Most Admired Brand earlier this year and has been the recipient of several awards for their reliable and affordable products. The brand is also the number one smartphone brand under 70,000 naira globally. A feat many applaud as the brand’s mission is for everyone to Enjoy Better Life. It comes as no wonder that the brand has announced the itel S18 series as the best selfie vlog smartphone for Nigerians.

With users’ wants and needs in a phone constantly changing, the itel S18 series was designed as a response to these needs. Appropriately tagged, ‘Made for Selfie Vlog’, the itel S18 series offers users the chance to be more creative and share their videos and pictures with the world at an affordable price tag.

Made For Selfie Vlog

Short videos are the trending thing and the itel S18 is equipped with an 8MP AI selfie camera for clear videos. The camera’s high-definition pixels have been paired with video beauty mode to give users the perfect version of themselves. The front camera flashlight guarantees clear selfie vlogs even in lowlight. Users are free to paint their stories in incredible and creative detail whenever they use the itel S18.

Impressive 3D AR stickers come preinstalled with the camera and give users customized and fun selfies. The video beauty mode feature then gives them the self-confidence to share their creativity with their loved ones and communities.

The itel S18’s 64GB large storage can store more than 10,000 photos and 5,000 songs. There is 2GB of RAM which users can extend to 4GB with the Memory Fusion feature on the smartphone. The body of the itel S18 has a stereoscopic pattern tailored for trendy users. The smartphone is 8.7mm slim with a straight edge design and comfortable grip. You can get the itel S18 in 3 colours, Mint Green, Digital Silver, and Midnight Black in itel authorized phone stores nationwide or on Jumia and Xpark.

Great Display, Strong Battery, Efficient Operations
itel S18 has a 6.6’-inch HD+ waterdrop FullScreen with 720*1612 screen resolution. Pictures, videos, and every detail is much more vivid and clearer. The 5000mAh long-lasting battery of the smartphone is another major satisfaction point. A fully charged itel S18 will support 20 hours of browsing, 15 hours of playing videos, and 24 hours of music playback time.

The itel S18 runs on 4G and the itel 0S 8.6 system. There is also the iboost 1.0 for all-round enhanced performance and increased apps stability.

Where Can I Buy The itel S18?
The itel S18 is now available in authorized phone retail stores nationwide for purchase and on itel’s Jumia store or X-Park online stores.

To learn more about the itel S18 and S18 Pro, you can tap on this link to get started.

Exclusive: Itel S15 and Itel S15 Pro is coming and here’s what to expect