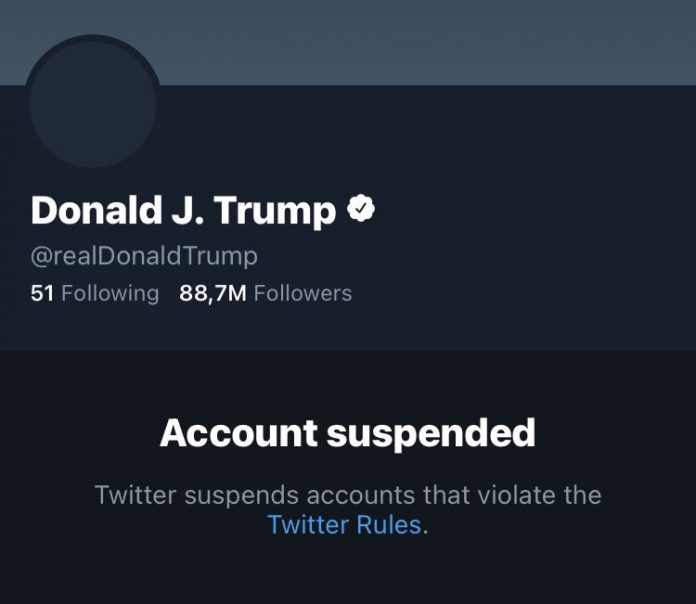 The 45th president of the United States, Donald Trump has been banned permanently on Twitter. This was shortly after the temporary ban on his official account @realDonaldTrump was lifted.

Twitter said in a series of tweets that they are permanently banning Donald Trump from using their platform for further incitement of violence in the state.

“After close review of recent Tweets from the @realDonaldTrump account and the context around them we have permanently suspended the account due to the risk of further incitement of violence.” Twitter said.

After close review of recent Tweets from the @realDonaldTrump account and the context around them we have permanently suspended the account due to the risk of further incitement of violence.https://t.co/CBpE1I6j8Y

Twitter’s decision to permanently banned on @realDonaldTrump account followed after He ” Donald Trump” tweeted a couple of tweets on Friday afternoon.

The tweets were said to have violated the company’s policy against the glorification of violence and “these two Tweets must be read in the context of broader events in the country and the ways in which the President’s statements can be mobilized by different audiences, including to incite violence, as well as in the context of the pattern of behaviour from this account in recent weeks.”

The first tweet was about Trump’s supporters. “The 75,000,000 great American Patriots who voted for me, AMERICA FIRST, and MAKE AMERICA GREAT AGAIN, will have a GIANT VOICE long into the future. They will not be disrespected or treated unfairly in any way, shape or form!!!” Twitter said the tweet could be viewed as an act to further encourage the disgraceful events that occurred on January 6.

Trump’s final tweet read: “To all of those who have asked, I will not be going to the Inauguration on January 20th.”

Twitter said the tweet concerning inauguration could be viewed as a further statement that the election was not legitimate. It also said that the tweet could be interpreted as Trump saying that the inauguration would be a “safe” target for violence because he would not be attending.

As it stands now, it seems only 2go and Crowwe are the only social media platform left for Donald Trump right now.