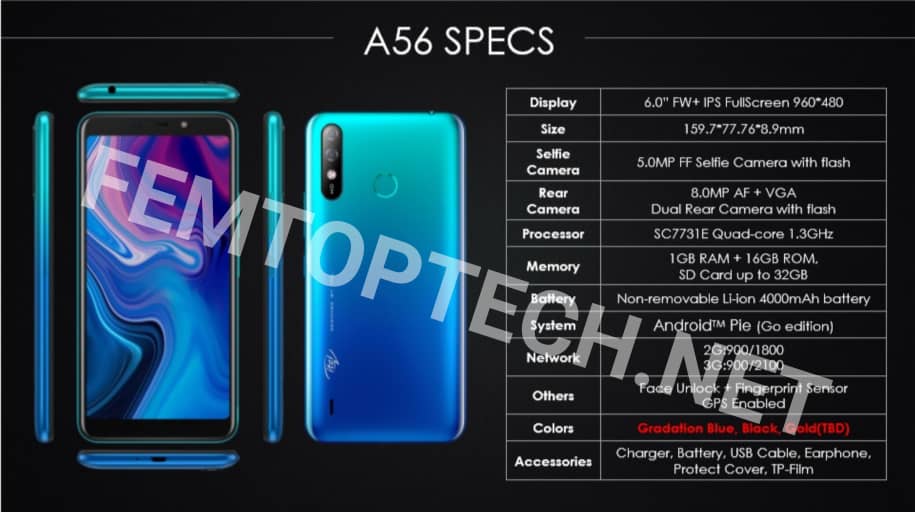 Femtoptech has exclusively learned that Itel Mobile is all set to launch a new smartphone from its A-series family dubbed Itel A56. The Itel A56 will be the successor of Itel A55 which boasts of coming with more improved battery life and updated Operating system.

The Itel A56 is a budget-friendly with a decent specification featuring 6.0″ FW+ IPS FullScreen (480 x 960 pixels) display. Under its hood, the phone is expected to come with a Quad-core Unisoc SC7731E processor paired with 1GB of RAM and expandable 16GB internal Storage.

The Itel A56 is expected to boot Android 9 Pie Go edition out of the box and it will be powered by Non-removable Li-ion 4000mAh battery. The phone is also equipped with a rear-mounted fingerprint sensor and face unlock technology for security.

Camera-wise, the leaked spreadsheet suggested that the Itel A56 will feature a dual rear camera setup with 8.0MP AF + VGA configuration, and a LED flash. On the front, the phone has a 5.0MP Selfie camera with Flash. Features of the camera include portrait mode, HDR, AI beauty mode, and automatic scene recognition.

Femtoptech also learned that the Itel A56 would be launch here in Nigeria in March. It is also rumoured that there are other devices that will be launch alongside the Itel A56 but we are yet to get the full details of these devices but once we have details, you will be updated.