The much-anticipated device, Itel S15 Pro has been launched into the Nigerian market with a priced tag of N29,500. The S15 Pro was launched alongside the S15 which is the normal variant. Both devices are the latest addition to the Itel S-series.

The Itel-Series are known for selfie-focused and here we can see a bigger upgrade from the company as they have successfully unleashed both devices with a 16MP selfie camera with 4in1 Big pixel front selfie camera with a waterdrop display.

So in this post, I shall be sharing with you my unboxing and quick hands-on review of the Itel S15 Pro.

The box of the Itel S15 Pro is just like the regular boxes we are used to but here again. On the top, we have the name of the device written alongside a 4G logo telling you that the device support 4G. 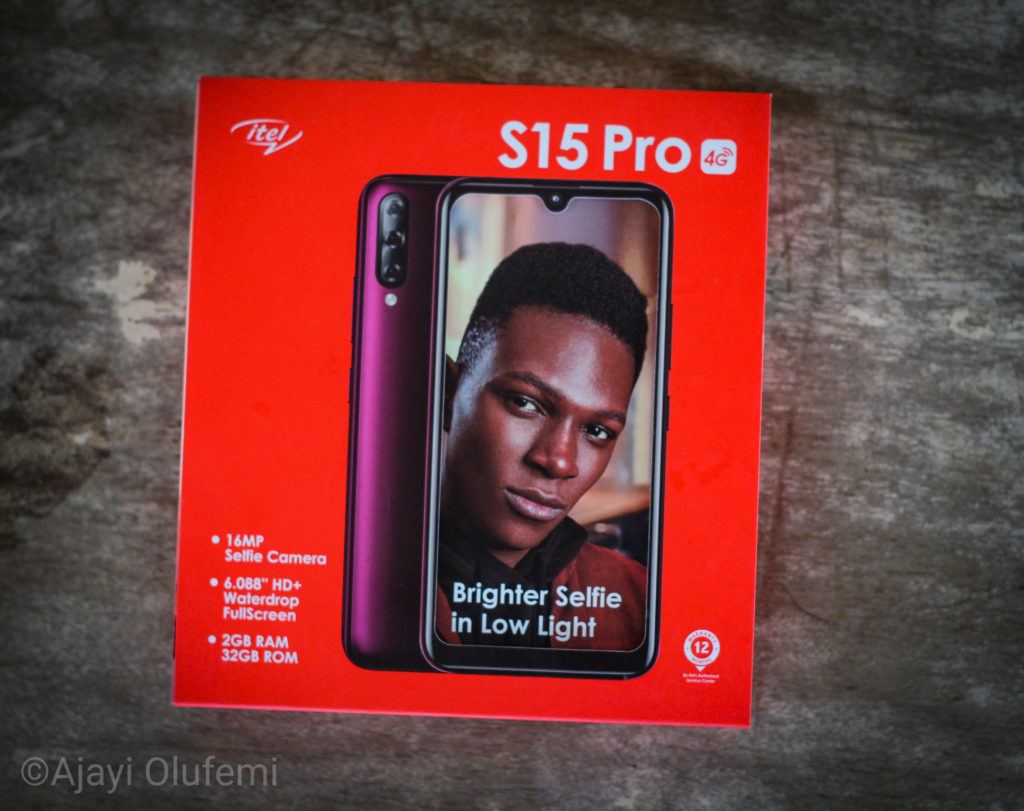 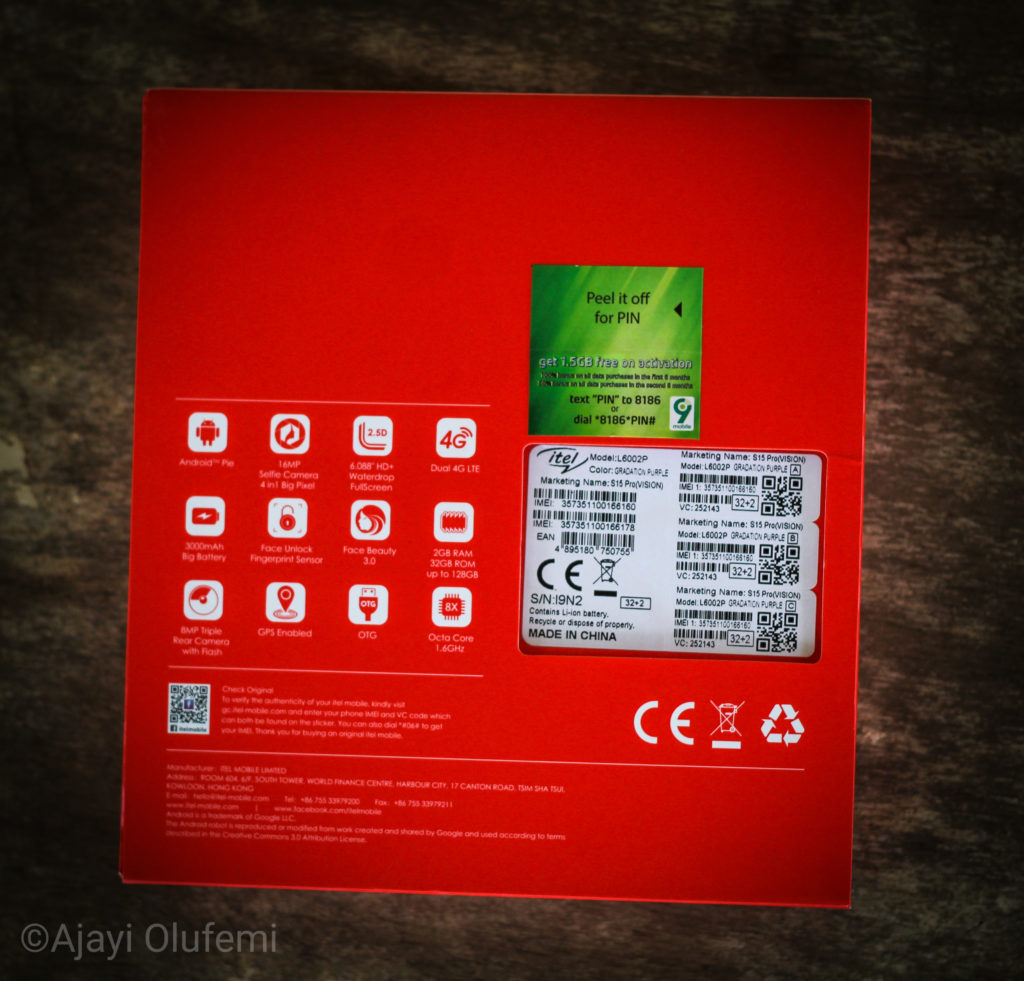 But here I noticed that the box actually comes in two, the first one is just like a dummy box while the other box is the one that houses the phone. So it is required of you to remove the first box to get you to the main box. 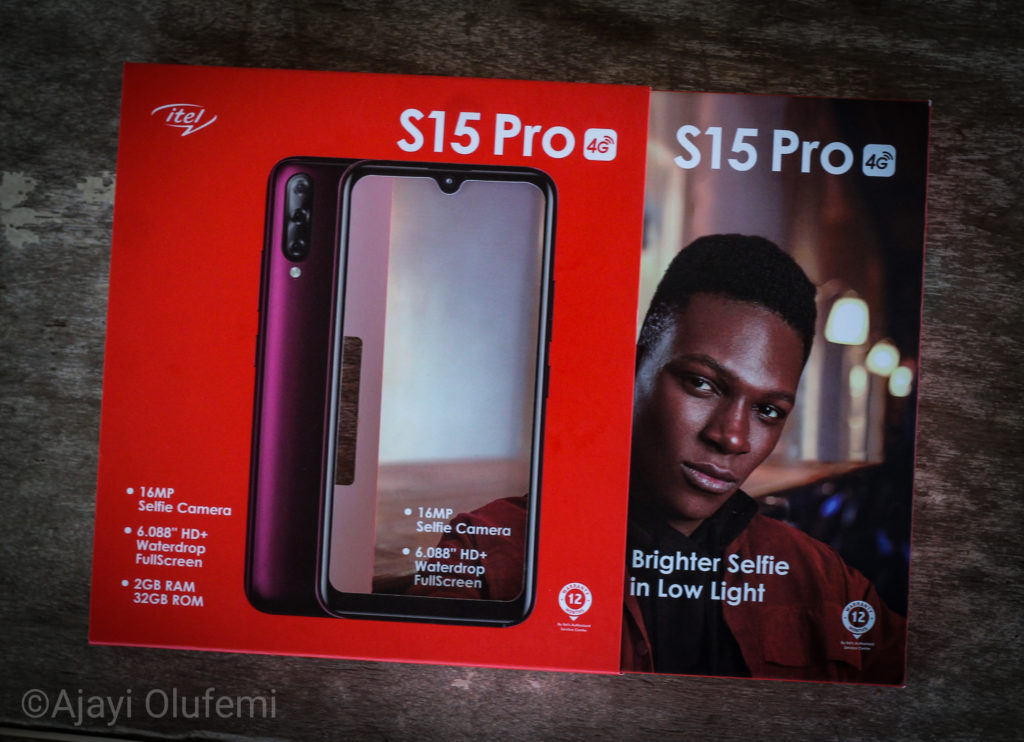 But what’s inside the Box?

To unbox the box, you have to, first of all, unwrap the box and cut out the sealed. Now open the box, you will be greeted with the 6.088-inch IPS Waterdrop Fullscreen itel S15 Pro appears on top and after then, you will see its other accessories inside the box, which are:

– A pair of earphones 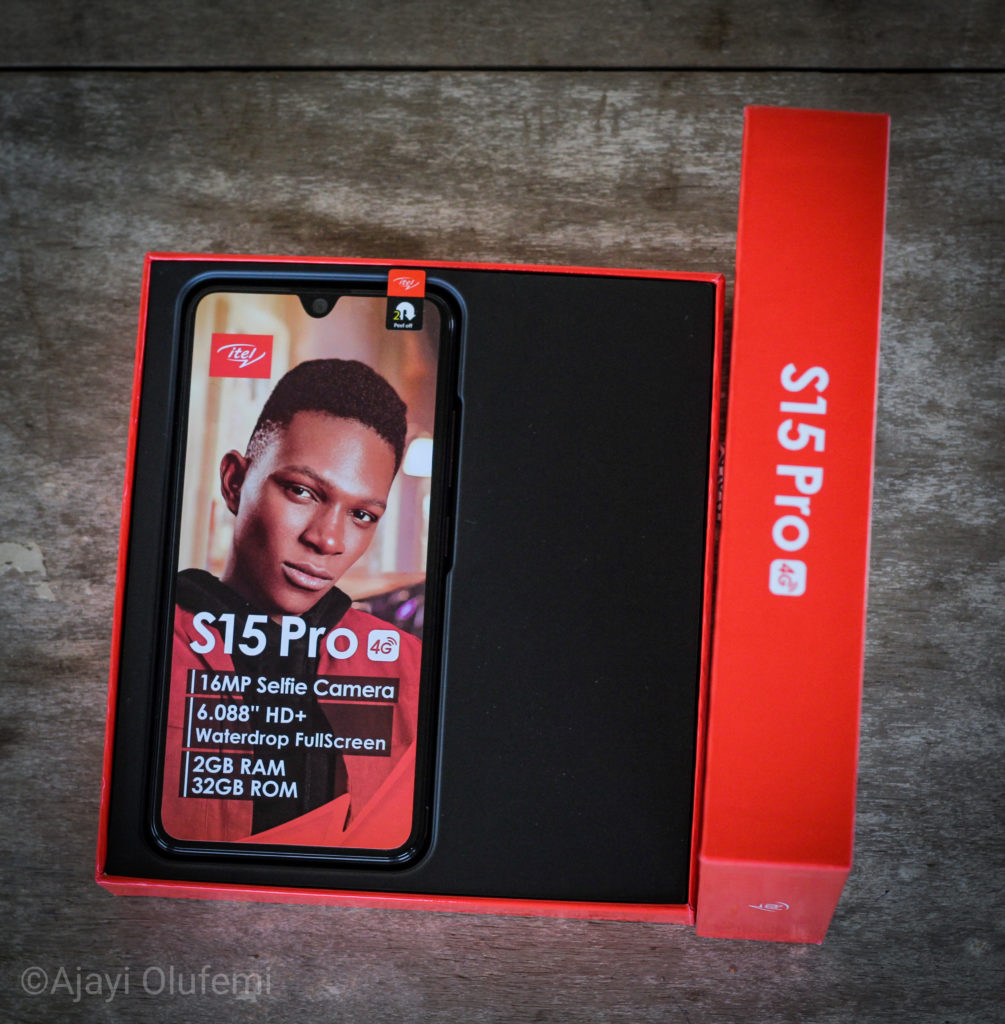 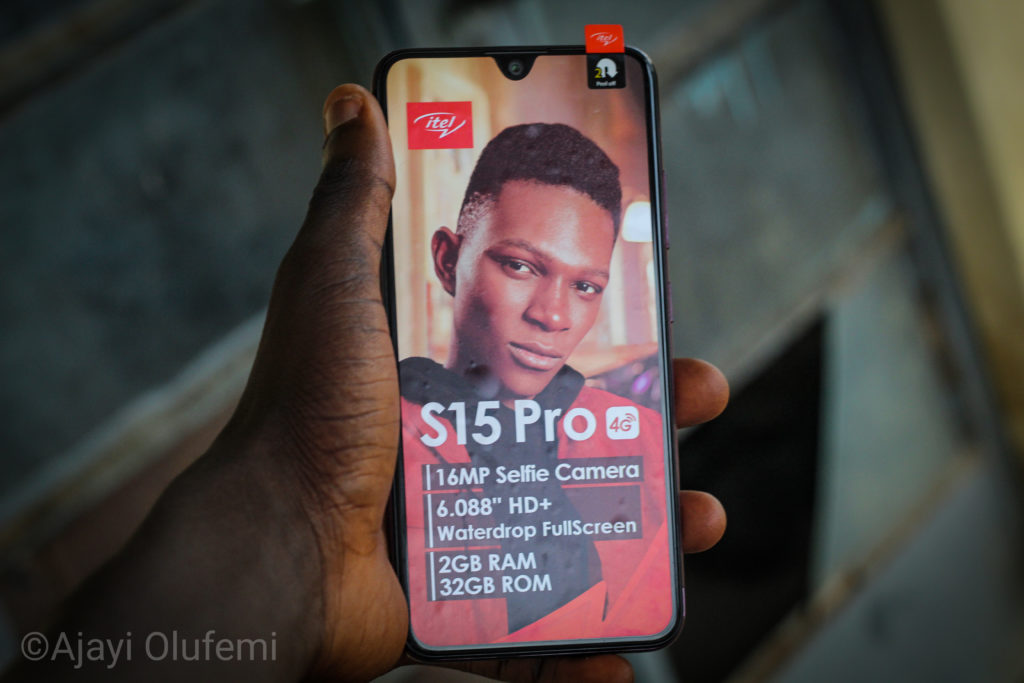 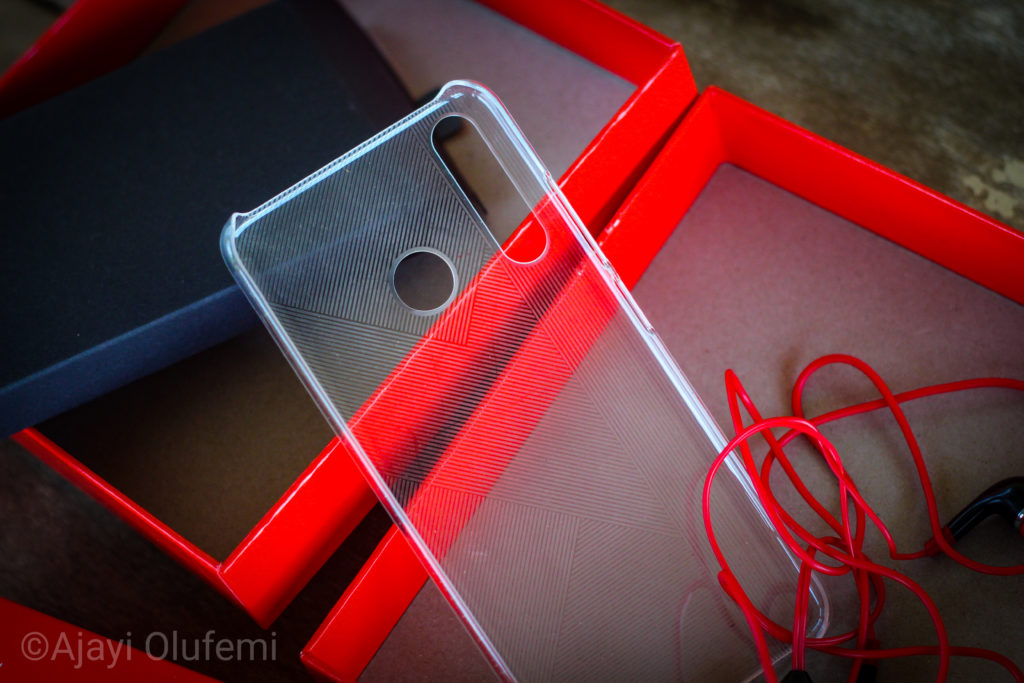 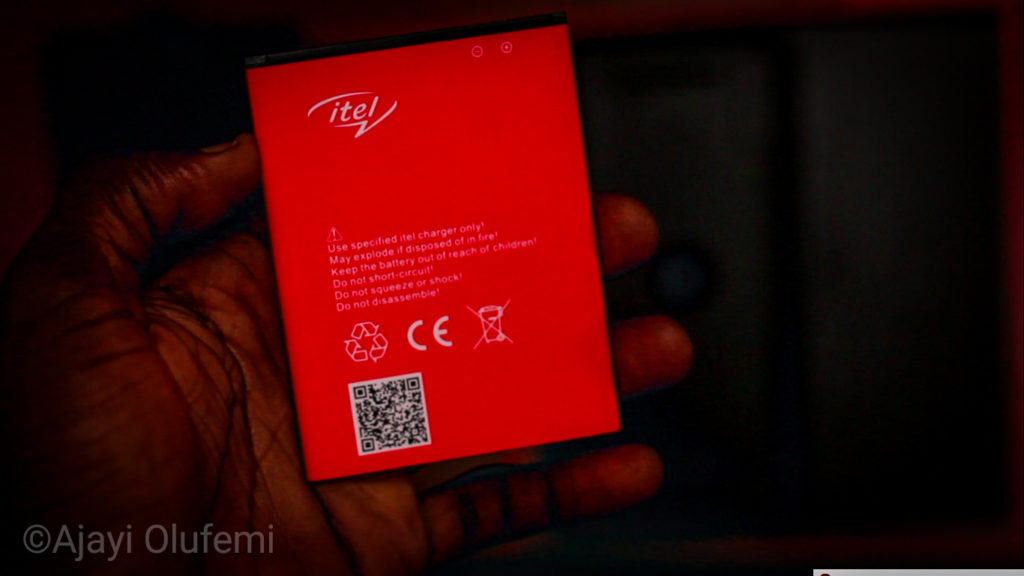 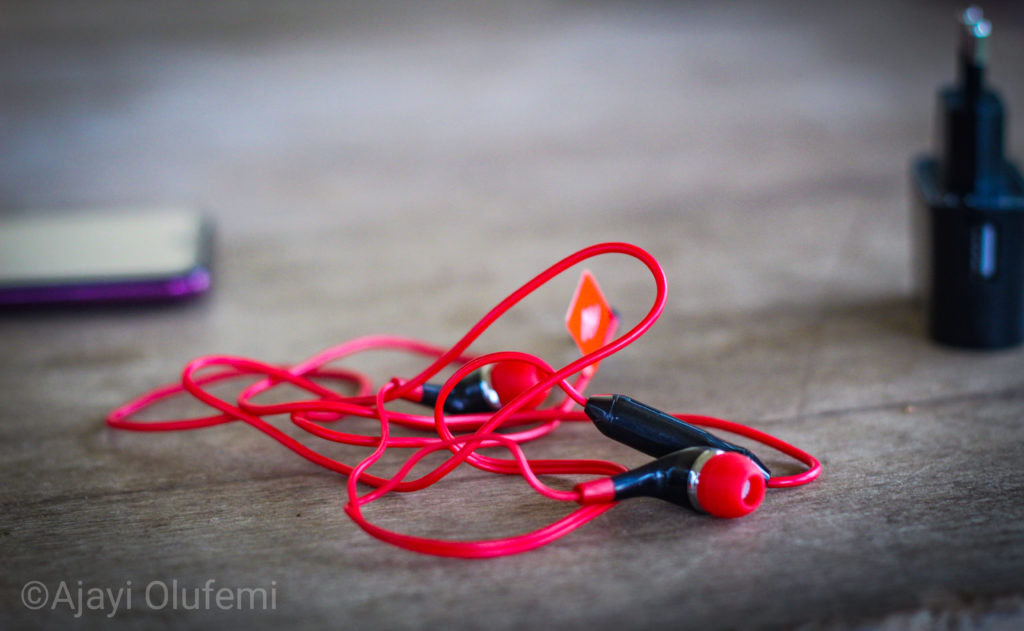 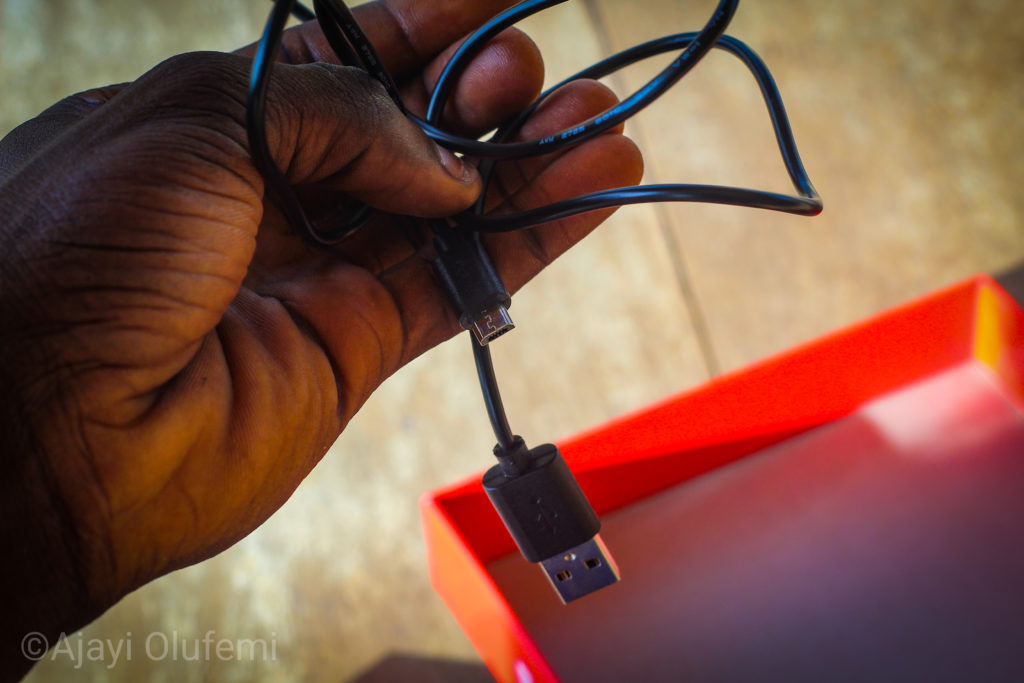 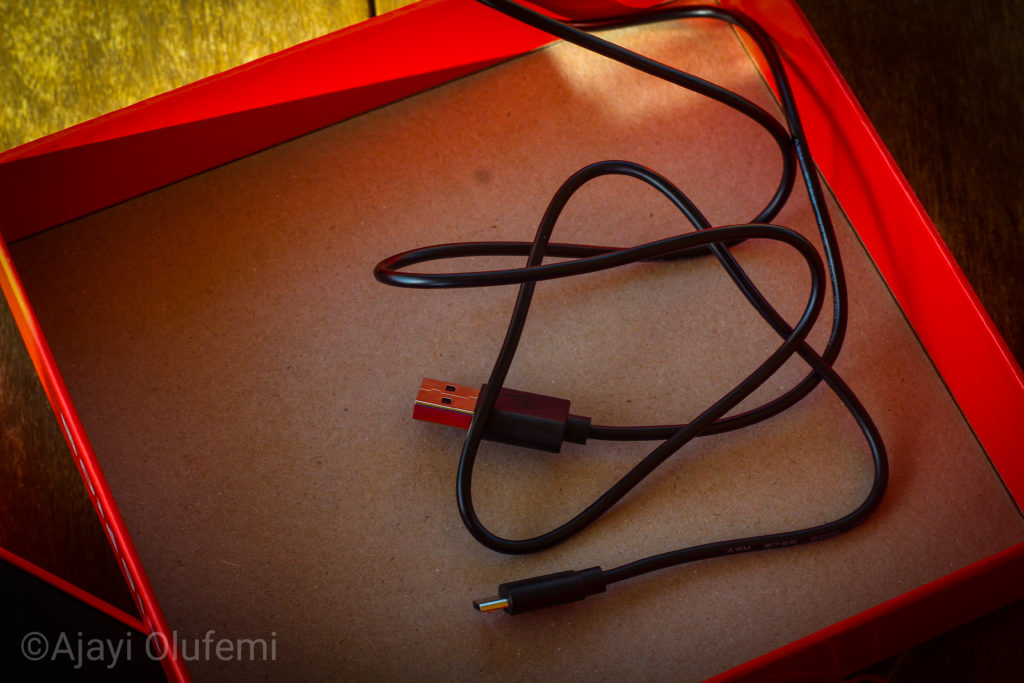 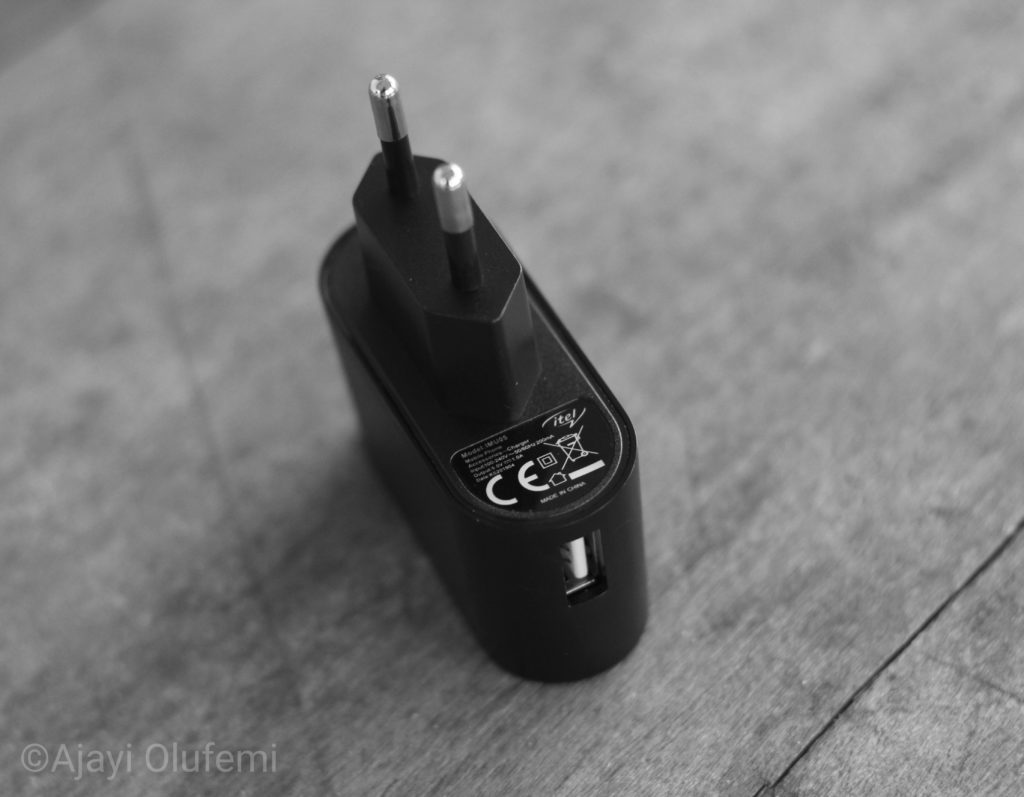 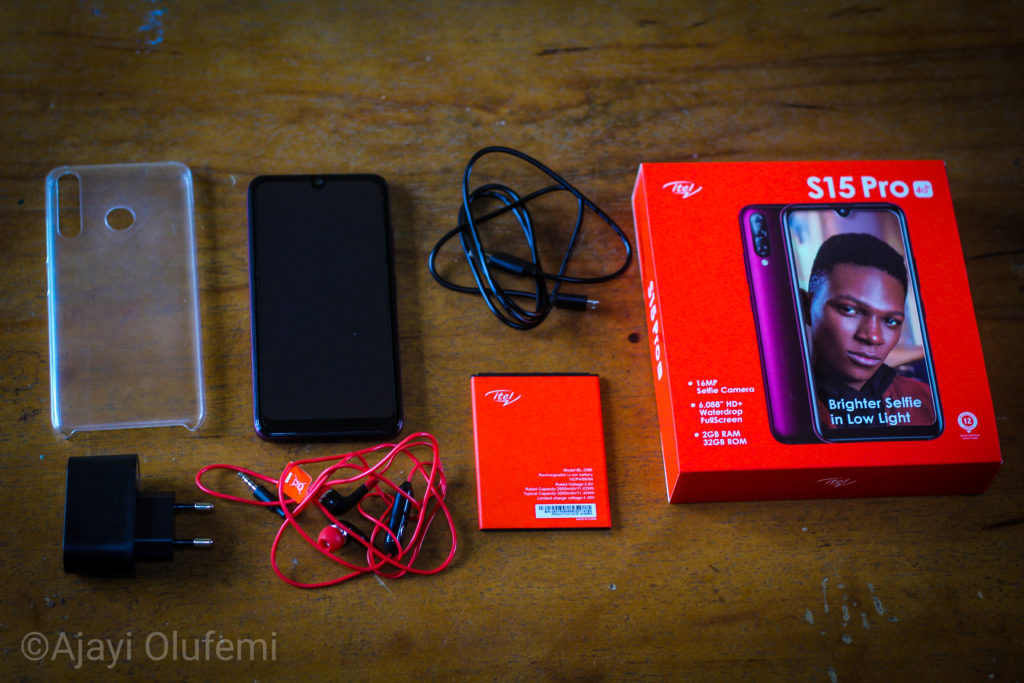 One of the things I noticed here in the device is the big display and the water drop feature. Yes, the Itel S15 Pro is the first of its kind to come with a waterdrop display and it also packed a 6.088 inches HD+ IPS FullScreen. The device still has bezel both on the top of the device and the bottom. The screen resolution is 1560×720 which can handle Full HD movie movies well. 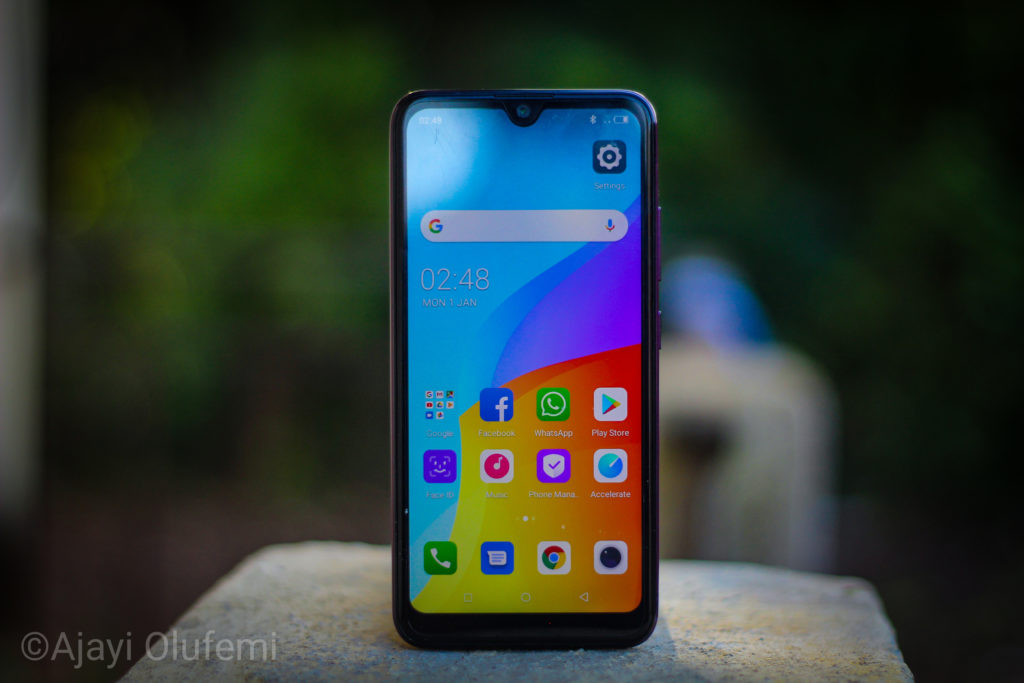 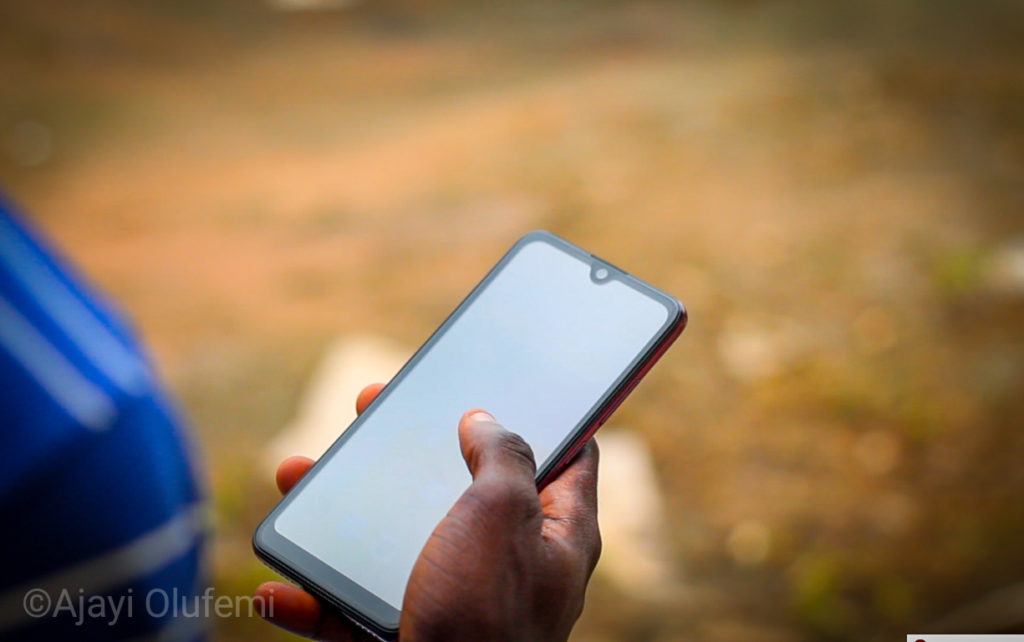 I really loved the User Interface of the device. Clean and the apps are nicely arranged. It preloaded with Google apps and some other social media apps. The device runs on Android 9 Pie.

Under the hood, it has Spreadtrum 98634A Octa-core 1.6GHz alongside a whopping 2GB of RAM that can handle multi-tasking so well. I tested it out and it and the result were just like I wanted. Someone can now log to Twitter, Instagram, play games and don’t worry about the device lagging or hanging. The internal storage is 32GB and Interestingly, it can be expanded to 128GB via using a micro card. This is just so mind-blowing. 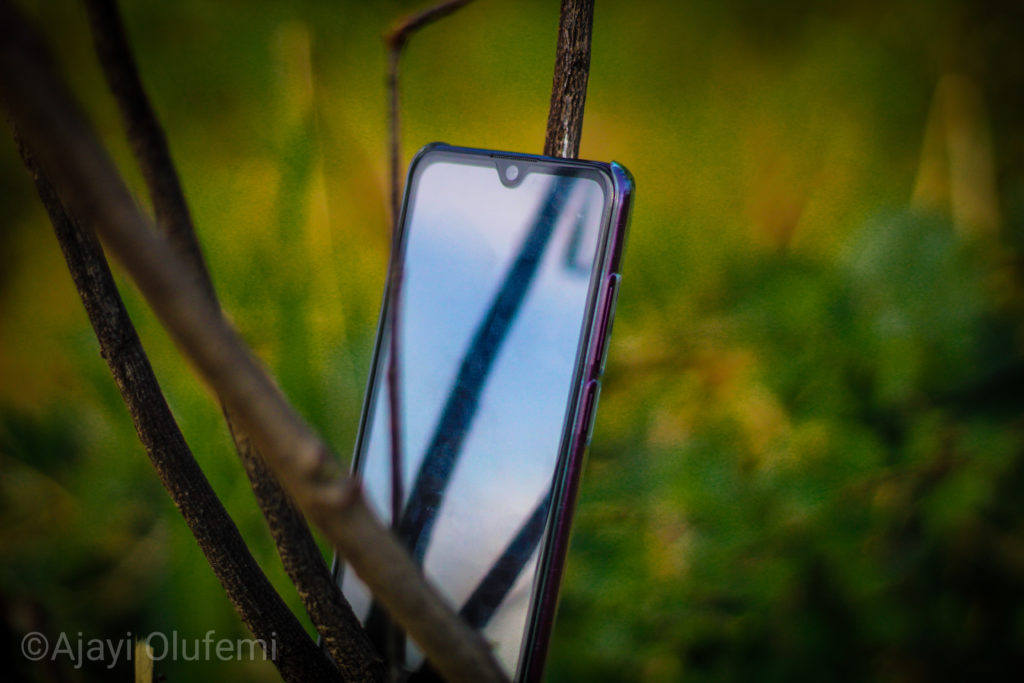 At the top of the waterdrop display, we have the 16MP front-facing camera which is one of the selling points of the device. The camera can be used to unlock your phone when you activate the Face ID. The camera is quite amazing. It gives brighter selfie in low light, in my review article I shall be sharing pictures taken with the device in low light.

On the top of the device, we have the 3.5mm headphone jack and beneath the phone, we have the micro USB port and guided with a dual loudspeaker. 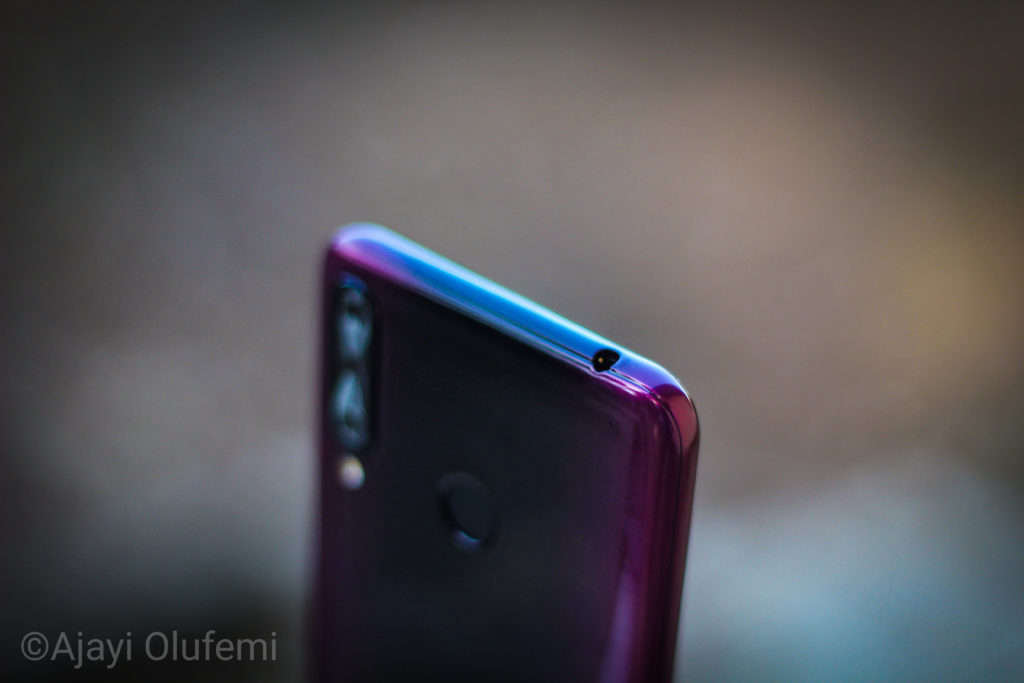 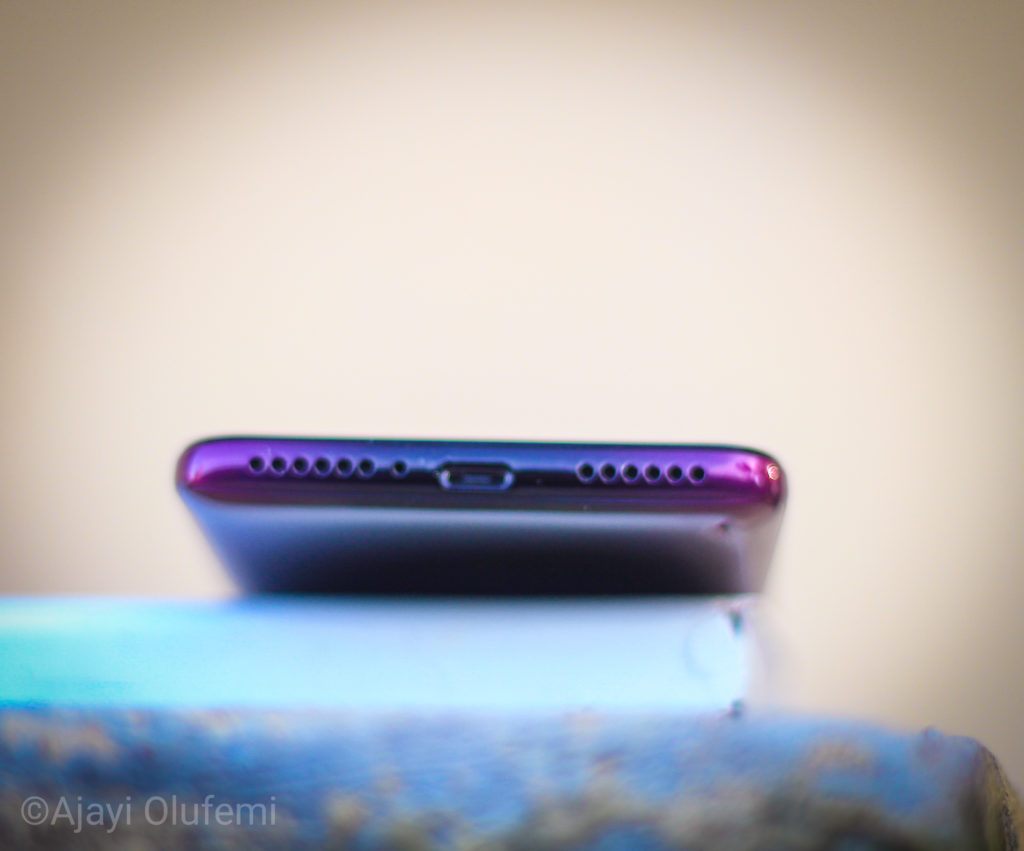 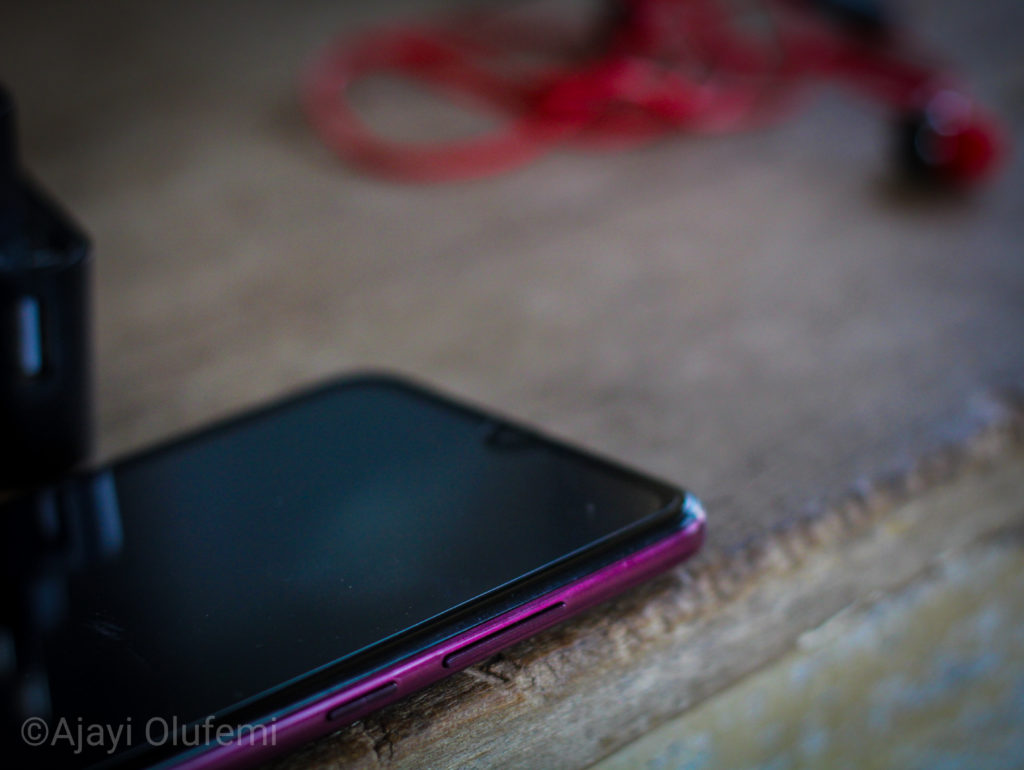 On the rear side, we have the 8MP Triple camera with Flashlight then accomplished with a Finger Print scanner. This is the first device from Itel coming with a triple camera. I tested the camera out and its shots are amazing. 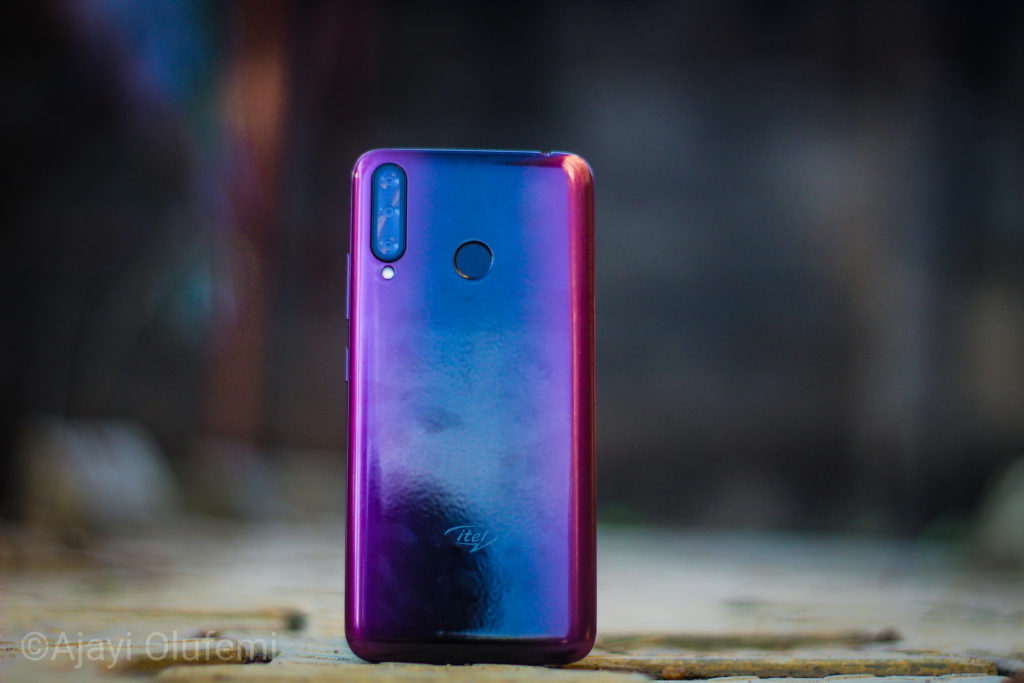 The phone supports dual Nano-SIM and both SIM support 4G. The 4G Bands supported by the device are B1, B3, B7 and B20 which are the bands used by major network provider here in Nigerian but does not support 4G bands at the moment. 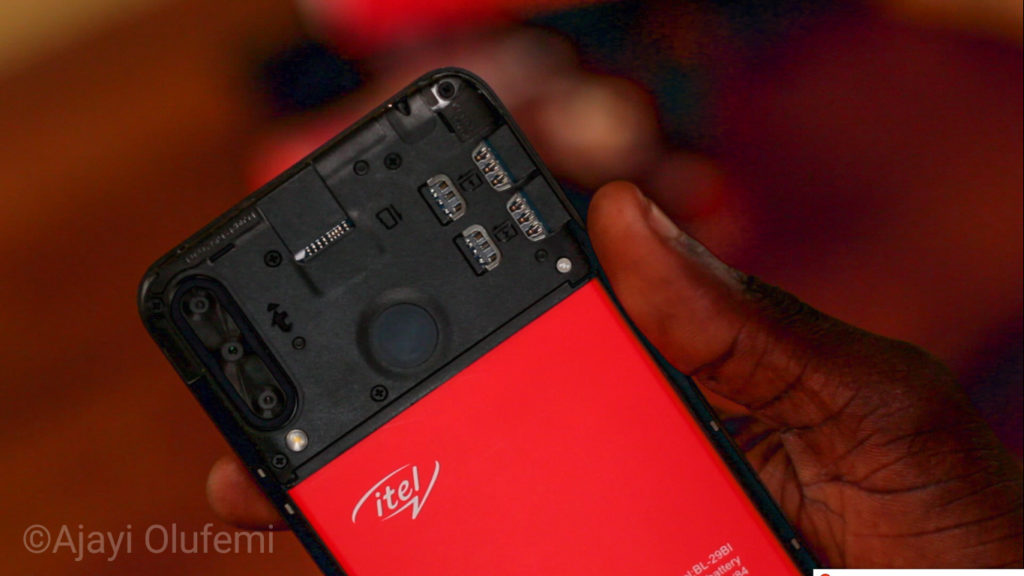 The phone also supports OTG connection that gives you access to connect your external devices like Flash drive, fans, and other devices to your phone.

The whole device is powered by 3000mAh battery capacity which the company says can give you full day usage. Well, I will prescribe that you get a standby power like a power bank to give you more power usage.

Interestingly, we have the normal variant at hand which goes for just N22,800 right in our online store. You can buy the Itel S15 via this link here:  In some days to come, we shall be having the Itel S15 Pro too in store.

Right on our store at Shop Femtoptech, we are using a secure online payment (Paystack) and we also accept bank transfer. We delivered nationwide and you can visit our online store here or call us 08149773598 to order for your Itel S15 at shikini money.

Ajayi Olufemihttps://femtoptech.net/
Previous articleLimited Offer: Buy Itel S15 For Just N22,800
Next articleOPay: How To Transfer Money To Any Bank With Just N10

As one of itel's most successful brands, the P series has evolved over the years with new updates and improvements, earning the title, the...
Read more
Itel Mobile

Femtoptech has exclusively learned that Itel Mobile is all set to launch a new smartphone from its A-series family dubbed Itel A56. The Itel...
Read more
Review

itel, the global premium mobile phone and accessories brand, continues to prioritize giving its customers control, functionality, fun and value. In keeping to that...
Read more

As one of itel's most successful brands, the P series has evolved over the years with new updates and improvements, earning the title, the...
Read more

Former Nigeria presidential aspirant Adamu Garba II as announced that he has decided to step down as the CEO of Crowwe app. Crowe app...
Read more

The founder of Crowwe, a messaging platform, Adamu Garba, who instituted a $1 billion lawsuit against the Chief Executive Officer (CEO) and Founder of...
Read more

FemtoptechNG is one of the Nigerian fast-growing tech blogs that focus on publishing tech news, reviews, phone specs, and everything around the technology world.

GbWhatsapp has been updated to version V5.7 for Android users. The app is the modded version of Whatsapp, it comes with features like; modification...
Read more
Airtel

UPDATE: If you are just thinking of activating the MTN 7GB/14GB/18GB data for N2000 then you already missed it, see why. This is one of the...
Read more

We use cookies on our website to give you the most relevant experience by remembering your preferences and repeat visits. By clicking “Accept All”, you consent to the use of ALL the cookies. However, you may visit "Cookie Settings" to provide a controlled consent.
Cookie SettingsAccept All
Manage consent

This website uses cookies to improve your experience while you navigate through the website. Out of these cookies, the cookies that are categorized as necessary are stored on your browser as they are essential for the working of basic functionalities of the website. We also use third-party cookies that help us analyze and understand how you use this website. These cookies will be stored in your browser only with your consent. You also have the option to opt-out of these cookies. But opting out of some of these cookies may have an effect on your browsing experience.
Necessary Always Enabled
Necessary cookies are absolutely essential for the website to function properly. This category only includes cookies that ensures basic functionalities and security features of the website. These cookies do not store any personal information.
Non-necessary
Any cookies that may not be particularly necessary for the website to function and is used specifically to collect user personal data via analytics, ads, other embedded contents are termed as non-necessary cookies. It is mandatory to procure user consent prior to running these cookies on your website.
SAVE & ACCEPT
Skip to toolbar