The Android Go is a version of Google’s mobile operating system which is designed specifically for smartphones with 1GB of RAM or less and limited processing ability. 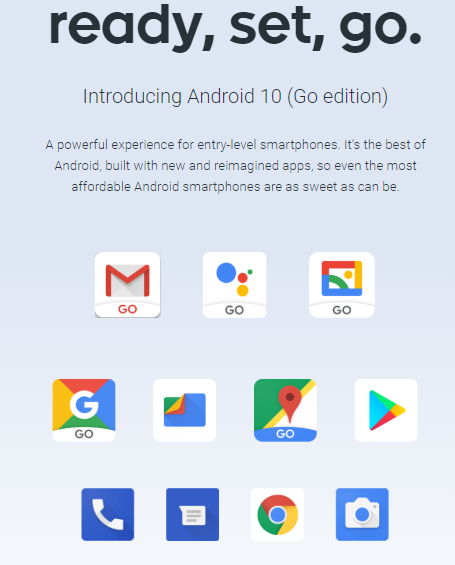 As you know, the Android Go OS comes with all the standard Google Go apps like Gallery Go, YouTube Go, and Maps Go as well as the new Google Files app. There’s also peer-to-peer sharing support for files, an improved data saver and Google is looking to team up with even more developers to bring a larger selection of Go apps.

According to Google, “With smaller app sizes, more storage space, and way more control over how your content is stored, it’s easy to see the ways Android 10 (Go edition) helps you save”.

The latest version of the Android Go edition focuses on improved data encryption for users with Google’s Adiantum encryption system.

1. The software includes lightweight versions of official Google apps found on the standard version of Android 10, and it also takes up less space on the device’s internal storage than the full version of the operating system.

3. We have an improved File Manager app and a selection of new apps such as Gallery Go, Google Go, and Gboard on Android 10 Go

The Android 10 Go edition would be coming later this year on these devices; Tecno Spark 2, Samsung A2, Xiaomi Redmi Go, Itel S15, Nokia 1, Safaricom Neon Storm, Mobicel, and others.

Inside Look: Google Is Inviting All Computer Science Students Graduating in 2017